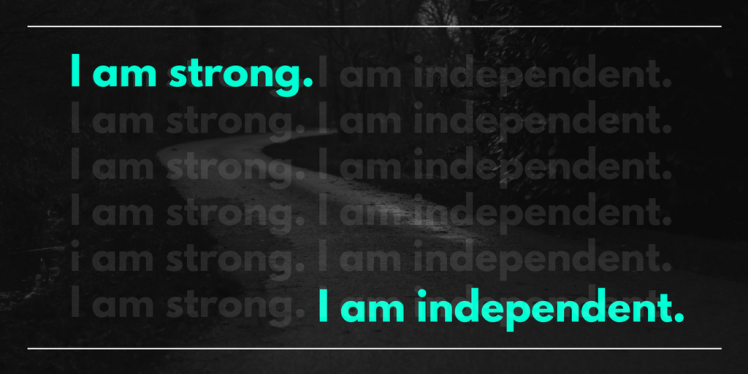 Now, if that title alone offends you, then you most certainly need to read this. So please hear me out.

I don’t remember a time in my life when I was not described as “strong,” and/or “independent.” And it always felt good. (Of course it did.) It felt good to know that I could – and was expected to – forge ahead despite limitations, not crumble under pressure, and achieve my dreams with little or no help or support from anyone. I was the only human being I needed and as long as I was on the ball, all was well.

And that served me well for many years. I mean, who needs the risk of bringing other people on board only to slow or sink the boat, right? Ditch ’em “distractions” and go make magic happen. That’s what I always said.

But that’s where the cookie began to crumble. You see, I started to notice that I was having what I called “episodes of weakness” more frequently than I cared to admit. Cracks were starting to appear that suggested that maybe, just maybe, I wasn’t as strong as I had taught myself to believe I was.

More worryingly, when those cracks started to show up, my ego, y’know, the one that had been massaged and pumped for so long, refused to allow me admit that I was anything but perfect. Instead, it relentlessly searched for and presented me with evidence that there was no room for uncertainty, vulnerability or weakness in my strong and independent makeup. “It’s common sense!” it said, “How can Superwoman possibly ask for help from anyone? She’s always the rescuer, never the rescuee.”

And I bought it too. Oh, I lapped it up! Hmmph. Until, just in time to prevent me from having a complete melt down (thank God!), I learned a valuable lesson from the bible that completely transformed my positioning…and my life.

Take a look for yourself:

“So Joshua did what Moses had commanded and fought the army of Amalek. Meanwhile, Moses, Aaron, and Hur climbed to the top of a nearby hill. As long as Moses held up the staff in his hand, the Israelites had the advantage. But whenever he dropped his hand, the Amalekites gained the advantage. Moses’ arms soon became so tired he could no longer hold them up. So Aaron and Hur found a stone for him to sit on. Then they stood on each side of Moses, holding up his hands. So his hands held steady until sunset. As a result, Joshua overwhelmed the army of Amalek in battle. ‭‭Exodus‬ ‭17:10-13‬ ‭NLT‬

Do you see it too? Incredible!

The victory of the Israelite army (or the success of the project, if you like) depended entirely on Moses. His actions alone were responsible for the ultimate success or failure. That’s brilliant, Mr strong and independent Moses. It must have felt good to know he was a kingmaker. The biggest player on the field. The Mastermind. But. It only lasted a season; until he grew tired.

That, right there, is the critical make or break point when the strong, independent and fearless one finds that she cannot go forward without help and support. Does she continue to strive, with the slim hope that she will survive fueled by the rich temptation that victory will be credited to her and her alone? Or does she turn to the people that have been positioned in her life for the very purpose of helping and supporting her to the finish line?

Sad to say, many strong, independent women don’t know when to take that leap. They don’t know when it is absolutely necessary to entrust themselves into the hands of other people. Or, they do know, but their reluctance prevents them from doing so. And that is what mostly accounts for the downfall of the strong and independent woman.

I learned this lesson. I shaved off the ego. I took off my Superwoman cape. I went and got me some help.

Do you have the courage to do the same?

I am Olawunmi. The Spirit-filled Transformational Coach.

I help Christians get from “stuck,” “dissatisfied” or “overwhelmed” into the life they truly want, with ease.

Check out my website for more details of how I can help you drop the hustle and ease into your dream life: http://www.olawunmibrigue.com